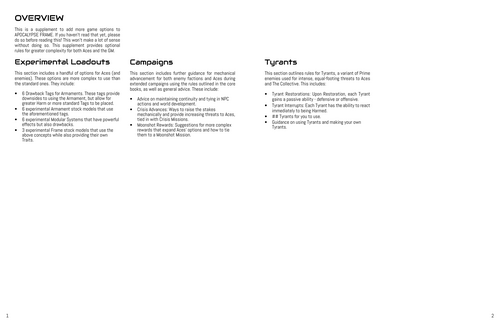 Hi there! I'm going to both announce a supplement to APOCALYPSE FRAME core, tentatively titled Aces High, and also talk a little bit about one part of it. The supplement is going to be bundled in free with the core book because it contains stuff I feel is necessary to an experience that feels complete. (Also, it gives you an idea of what I'll include in future non-bundled supplements.) You can see my current overview spread for it below: 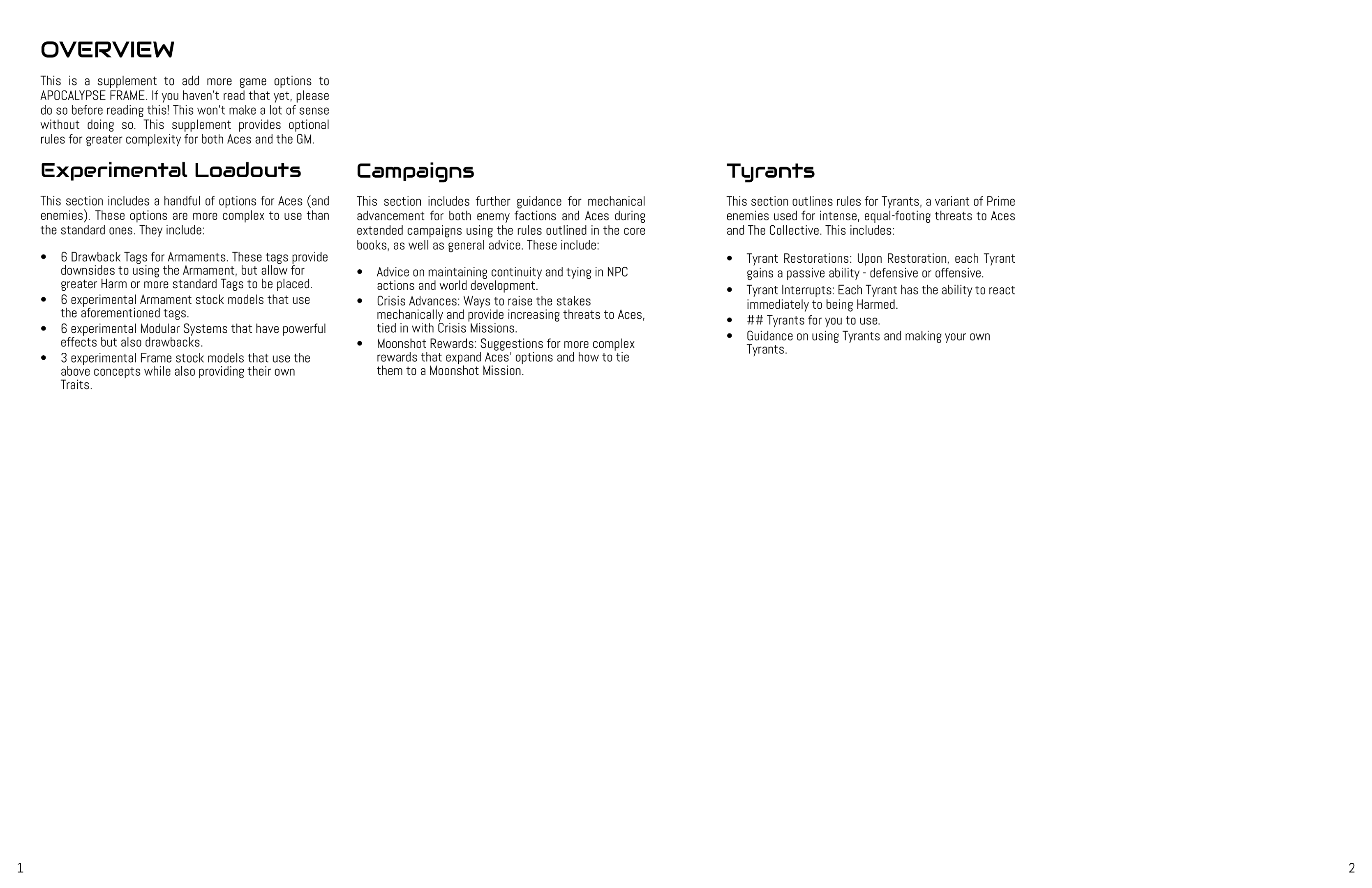 In this post I'm going to be talking about Experimental Loadouts: Armaments, Modules, and Frames that are powerful but have drawbacks or configurations that require great care to use properly. Armaments will be the biggest focus because they have the biggest change.

To talk about the Armament changes I've made, it's going to be helpful to talk about my baseline. I've alluded to it in the past, but to be explicit about it, core Armaments are balanced around a 3-Harm baseline, where each Tag (range or otherwise) counts as 0.5 Harm. This means that Armaments tend to fall into one of three categories:

This works well as a balanced baseline for the core game, but I'm looking to add a little unbalance for this supplement. So, Drawback Tags.

The idea of Tags that are purely negative is present in LUMEN and LIGHT, though they're not so explicit as the Tags in APOCALYPSE FRAME. Some of those I turned into positive tags (Charge, Stationary) but others I had simply omitted in favor of having only positive Tags. For this supplement, though, I'm bringing them back. A Drawback Tag is one that's purely negative. An example of one that I fleshed out from LIGHT is Reload:

This is something that isn't debilitating to use, but has a chance to create problems afterwards. Others will provide penalties on use or force rolls on things that don't normally need rolls (similar to how Frame Damage works).

To use these tags, I'm pricing them at -1 Harm, so they can be offset by either +1 Harm or two Tags. To demonstrate their use, some Stock Models are provided, each of which has one Drawback Tag. To preview the one associated with Reload:

This one is recognizable if you're familiar with the core Armaments: as the description and name suggest, it's the Kinetic Cannon but with the Reload Drawback Tag offset by the Near and Splash tags from Shotgun.

Modular Systems are more complicated. Each one's function is semi-unique, so leaning on Tags isn't ideal - instead, they'll simply have drawbacks baked into their usage on a case by case basis. Here's a preview of one:

This allows the Ace to decide when to really lay on the hurt - it's essentially a two-target version of Precision Laser - but it puts them at noticeable risk and reduces their Tension for next turn.

Finally, three new Frames (one medium, one light, one heavy) will be included. Each has one of the aforementioned Stock Models and one of the aforementioned Modular Systems. In addition, each will have a fairly opinionated theme/usage case based on its Integral Trait/System - much like everything else in this supplement thus far, it'll be hard to use to its full potential by a new player. To give a preview of one of the three:

How to Incorporate These

Finally, some guidance as to how to include these into your game is included - both access to them in general as well as acquisition (such as adding a randomized Drawback tag to gain a benefit). This ties in strongly with the next devlog I'll put out on the stuff that's coming for Campaigns.